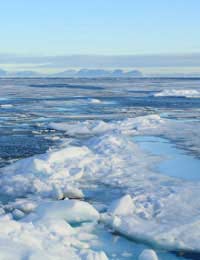 For more than half a century, the British Antarctic Survey has been taking measurements at the North Pole.

One of the world’s foremost environmental research organisations, it first began taking atmospheric readings in the Antarctic in the 1950s and in 1985, BAS scientists announced the discovery of the Ozone Hole.

Announcement That Changed The World

The researchers involved, Joe Farman, Brian Gardiner and Jonathan Shanklin, published their earth-shattering discovery in the journal, Nature, and it was instrumental in the introduction of the Montreal Protocol banning CFCs.

Measurements at Halley station originally began in a bid to understand more about the way ozone absorbs solar energy and, according to rumour, the scientists believed their instruments were faulty when they first discovered the existence of the Ozone Hole.

Scientists in America say that NASA actually discovered the hole before the British Antarctic Survey but believed that its measurements must be incorrect, until they were confirmed by the Survey scientists.

Currently, more than 400 people work for BAS. It has three stations in the Antarctic, including Halley, as well as two stations on South Georgia.

The present station at Halley is made up of a collection of buildings on steel legs, which have to be jacked up every year to keep them clear of snow. Four previous stations all had to be abandoned within a decade after being crushed by ice.

Despite the atrocious conditions, Halley is in operation all year round and is staffed by around 70 people in the summer and 16 in winter. However, very few of the winter staff are scientists – the main staff housed there are those with the technical skills needed to keep the station, its personnel and its experiments running, such as a doctor, mechanics, a cook and a heating engineer.

A major event in the Halley calendar is sundown, which marks the last day that the sun will rise over the horizon until winter ends. The base is then plunged into permanent darkness for more than 100 days until the sun eventually returns.

Sundown is marked by various events and parties and, traditionally, the winter staff streak around the outside of the base (although they are allowed to wear a hat, gloves and boots).

The base at Halley is an excellent location for studying the atmosphere and ozone depletion, and it has provided an unbroken record of readings since the first data was gathered there in 1956.

Its data is sent to forecasting stations to help with weather predictions, and Halley’s climate database is also used by researchers investigating climate change.

Its position at the edge of the auroral zone, where the Southern Lights are visible in the winter sky, makes it an excellent location for research into Geospace – the region of space where the solar atmosphere interacts with the magnetic field of the Earth.

Following their discovery of the Ozone Hole, Farman, Gardiner and Shanklin received the Society of Chemical Industry (SCI) Environment Medal, reserved for those who have achieved the highest distinction in environmental science.

What is the Ozone Layer and How Does it Affect Us?

All About The Researchers Who Alerted The World To CFCs
Share Your Story, Join the Discussion or Seek Advice..
This has been perfect for my school project and has lead me to do other research. It's a really interesting topic, and I got 78% thanks x :)
Chloe - 23-Sep-15 @ 2:29 PM
Thank you for the information. I was nevertheless surprised to find no mention of the work and crucial campaigning done previously for years by Molina and Rowland and others. The discovery of the hole confirmed the results of their deductions and laboratory experiments published in Nature eleven years before in 1974, shutting up interested deniers and precipitating the urgent and effective international action agreed with the 1987 Montreal Protocol and put into action in 1989.
Claudio Munoz - 25-Nov-14 @ 1:17 PM
"For more than half a century, the British _Antarctic_ Survey has been taking measurements at the _North_ Pole." Interesting.
LiamIAm - 3-Aug-12 @ 3:24 PM
Title:
(never shown)
Firstname:
(never shown)
Surname:
(never shown)
Email:
(never shown)
Nickname:
(shown)
Comment:
Validate: