Home > Ozone Facts > The History of the Ozone Layer 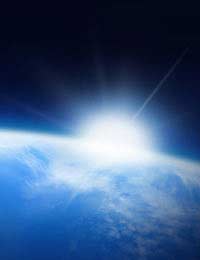 The Ozone Layer is a vital component in the history of life on earth.

Without it, mankind and most forms of life that we know today probably wouldn’t exist and the environment of the planet would be extremely different.

Hundreds of millions of years ago, only single cell organisms existed on Earth and at that time, the planet lacked the oxygen that we need to live.

But as these organisms evolved, they began to release tiny amounts of oxygen through photosynthesis and over a period of millions of years, this led to the creation of the Ozone Layer.

Ozone is first thought to have been identified in 1839 by Christian Schonbein, a Swiss chemist who was actually looking at electrical discharges. (Ozone can easily be produced by a high voltage electrical arc such as a spark plug or an arc welder).

He named it ozone, from the Greek term “to smell”, because of its strong odour (which has been likened to the smell of burning electrical wires).

Schonbein wasn’t able to describe the molecular structure of ozone but this was achieved by Jean-Luis Soret in the 1860s. However, Schonbein continued his research and was one of the first people to suggest that higher concentrations of ozone at ground level could affect people’s health. As history has shown, he was correct in his assumption – ozone is now known to be a main ingredient of today’s city smog.

About 40 years after Schonbein’s naming of ozone, researchers examining the amount of UV radiation that reaches Earth discovered a sharp cut off point in the atmosphere – and correctly deduced that this cut off was because of ozone in the upper atmosphere.

However, French scientists Charles Farby and Henri Buisson are credited with actual discovery of the Ozone Layer in 1913. They carried out the first measurements of ozone in Europe and in 1920, GMB Dobson, a lecturer in meteorology at Oxford University decided to follow their example.

Dobson went on to research ozone for the next 40 years and was involved in the setting up of special stations around the globe to measure ozone. Frustrated by the equipment available to measure it, he also designed his own instrument.

In the 1930s, British physicist, Sidney Chapman, produced a theory explaining how ozone is created and destroyed in the stratosphere and this process became known as Chapman Reactions.

He established that when oxygen molecules in the stratosphere are hit by radiation from the sun, they can split into two oxygen atoms. When one of these separated atoms becomes attached to a complete oxygen molecule, it becomes ozone (O3 ). In later years, scientists realised that Chapman’s theory was incomplete and further research was undertaken.

At that time, the Ozone Layer was taken for granted. It had existed throughout the history of mankind and it hadn’t occurred to anyone that things might change.

However, in 1970 scientists began to suggest that this vital protection from the sun’s radiation could be affected by the actions of mankind.

And very soon afterwards, they confirmed that we had been unwittingly damaging the Ozone Layer –and putting our whole environment at risk - for at least half-a-century, through the use of man-made chemicals known as ODS – Ozone Depleting Substances.

What is the Ozone Layer and How Does it Affect Us?